This itinerary, which develops inside the Natural Park of Spina Verde, offers enchanting views of Lake Como, the city and the territory.
It starts from Piazza San Rocco, or from the square of Camerlata (reachable by bus), and from here you walk towards the Castel Baradello, from whose tower you can enjoy a view of Como. Continuing to Respaù, a splendid panoramic point that allows a 360 degree view of the territory and surrounding landscapes, we arrive at the archaeological excavations of Pianvalle. Here, from the end of the Bronze Age up to the Gallic invasions of the fourth century BC, it extended the village corresponding to the indigenous Como, belonging to the Golasecca culture, which was then abandoned in the late Celtic era.

We finally proceed to the hill of Sant’Euticchio, where there is a large iron cross, built for the XIX Centenary of the Crucifixion of Jesus Christ and where you can admire a breathtaking view of the city and the first basin of the lake.

The itinerary ends by going down to Prestino, or to San Fermo della Battaglia, then returning to Como by bus. During the itinerary it is possible to stop and relax in one of the many huts that you meet. 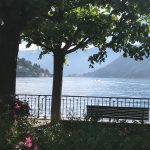 The most ancient festival of Lake Como