Valsolda was made famous by Antonio Fogazzaro’s book “Piccolo mondo antico”, which is set here, and the writer’s home is still in Oria.

The municipal area stretches from the lake to the mountain plateau.

The castle, with its unique setting, is also noteworthy.

Given to FAI from Marquis Giuseppe Roi

Villa Fogazzaro Roi is located on the italian side of Lake Lugano, few kilometers from Como and not far from Milano.

Antonio Fogazzaro’s esteemed 1895 novel of the same title, is set in 19th Century Lombardy, then under Austrian domination. Like Manzoni’s novel I PROMESSI SPOSI, the story is set into motion by the marriage of a young couple that meets opposition. The couple here is Franco and Luisa. Franco’s grandmother, the Marchesa, is his only “parent.” This cold-hearted, über-aristocratic matriarch won’t permit her grandson to marry Luisa, the daughter of a government “funzionario.” When he does so anyway, against her wishes, the fat old meanie disinherits him and does whatever she can to persecute the couple.

How to get to Villa Fogazzaro Roi in Oria, Valsolda (Co):

from Como: SS 36 until Menaggio; follow directions for Porlezza and then Valsolda.

The Villa will reopen to the public on Saturday16th March 2019 with the following times:

For more information write to faifogazzaro@fondoambiente.it.

Shopping in the center of Como 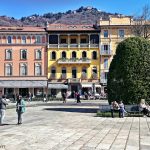