The Holy Nail and the seven locks
Torno is a charming place and rich in history on Lake Como.
In this small town is kept a relic almost forgotten.
It is guarded with devotion by the faithful of the country.
It is one of the nails of the cross of Christ, preserved in the Church dedicated to Saint John the Baptist that rises in the oldest part of the village.
It’s a 12th-century building, built between Romanesque and Gothic, restored and expanded in 1494.

I massi avelli (The boulders avelli)
What were they for?
Always in Torno we will find indications for some curious archaeological finds: “i massi avelli”.
They are erratic boulders of the quaternary of serizzo ghiandone in which they have been dug with care of the hollows, a sort of well made tanks, the largest measuring over 180 cm by 80.
There are five in a radius of about 1.5 km: Avello del Maas, Avello di Rasina, Avello delle Piazze, Avello Negrenza and Avello delle Cascine di Negrenza.

The real function of the avelli is not ascertained, it is thought they were of the burials going back to the prehistoric age.
But the doubt persists: why did only these “sarcophagi” reach us of this ancient people? And as avelli like those of these areas (there are some even in Lecco), you can not find them in any other part of Europe?!

A pyramid on Lake Como
It’s one of the most surprising and curious buildings of Lake Como.
An unexpected pyramid in the cemetery of Laglio, a bit kitch for some.

It’s the funeral monument of the great doctor and writer Joseph Frank.
Born in Baden, Germany, in 1771, he studied medicine and physics in Pavia and was a pupil of Alessandro Volta.
Dr Frank loved Laglio so much that he asked to be buried there.

Wonder if the other stranger in love with Laglio like Dr. Frank would want to stay on the shores of the lake forever, but it’s a little early to think about it, isn’t it, George?

The mystery of the river of milk
The last mysterious place we find near Varenna and is “the shortest river in Italy”, that is Fiumelatte so called for its raging white waters of foam.
The river comes out of a cave hidden in the thick vegetation and before diving into the lake runs a distance of only 250 meters.
No one has ever been able to identify its source and explain its intermittence: Fiumelatte, in fact, begins to flow on March 25 of each year and stops on October 7.
He appears and disappears like a ghost.
Many stories and legends among mischievous maidens, brave young people, darkness and fears are linked to this incredible river. 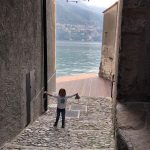 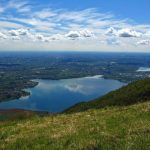